One Must Imagine Sisyphus Happy 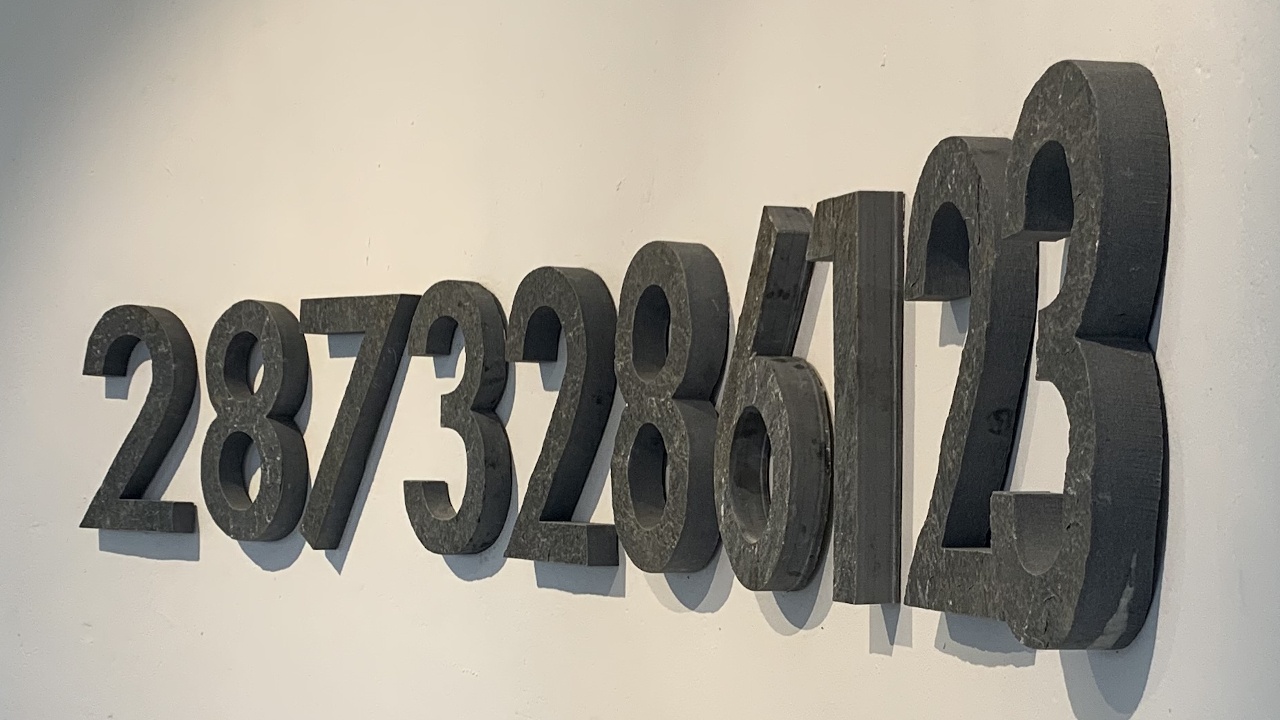 In his work “One must imagine Sisyphus happy” Radostin Sedevchev continues to examine such global topics as the boundaries of life and death, unique subjective concepts of the world and the way social self-determination of the individual is realized through the prism of time. The content is structured in the typical for this author camera obscura states, which collect various epochs into an optical focal point, where the past is represented through different personal archives, having accidentally found their way to the hands of the artist.

The basis of the present project is underlain by discovered notebooks containing data entered between 1945 and 1947 about the inhabitants of big cities around the world, copied from the renowned encyclopedias Meyers Lexikon and Larousse. At the top page of each notebook, one may find that the data have been extracted from the editions of Meyers Lexikon published between 1936-1942 and of those of Larousse printed in 1909 (the exhibition also presents a notebook with a copied excerpt from this encyclopedia). This means that even in 1945 these figures were already outdated. Nevertheless, the author of the notebooks has copied the information reflecting the numbers of the world population with pedantic consistency and in careful handwriting (perhaps intending it to be read by future researchers).

The historical context in the reflection of the strange contents of these notebooks focuses the attention on two major topics. The first one is human life as a value sealed in the data on world population, reflected in handwritten pages of a yellowish paper, and the second – the free access to information which during the war and the totalitarian regimes was a priceless privilege, unavailable to common people. In the years 1945-1947 Europe started to slowly recover after World War II, in which 60 million people had died – more civilians than in all other wars – and the majority of the European cities were in ruins. In Bulgaria, where the notebooks were found, in 1945 the People’s Trial took place, which was used as an instrument for the neutralization of the political and intellectual elite. Communists managed to destroy the opposition parties in the country and settle the establishment of the totalitarian system by exercising strict control over the printed press to deploy the full cultural expansion of the Soviet Union. In this sense, these notebooks are a subjective tribute to the martyred joy of allegiance to the world community of the living, reflected in the memorabilia from world encyclopedias, such as Meyers Lexikon and Larousse, particularly revered by every educated family.

With the title of his project “One must imagine Sisyphus happy” Radostin Sedevchev suggests another dimension to the content to the exhibition in the context of existential philosophy. In 1942 Albert Camus published his essay The Myth of Sisyphus. Existential philosophy, synthesized by Sartre in the slogan “existence precedes essence”, implies that the paradox in Camus’ essay that the constant human question “What is the meaning of existence?” cannot be answered, because our very existence has no meaning and we must learn to live with this idea. The motto of the existentialists that “man is condemned to be free” interprets freedom in the sense that one is free to decide who and what to be. No one’s identity has been constituted by neither by nature, nor culture, because “existence” means exactly constituting such identity. With the line “a blind man eager to see who knows that the night has no end, he is still on the go”, Albert Camus defines the endless rolling of the rock by Sisyphus as the repeated action of a man who has chosen the freedom to be an active participant in this world. Therefore, for Sisyphus “This universe henceforth without a master seems to him neither sterile nor futile. Each atom of that stone, each mineral flake of that night filled mountain, in itself forms a world. The struggle itself toward the heights is enough to fill a man's heart. One must imagine Sisyphus happy.”1

The definition of Sisyphean for all who are non-tempted by existential philosophy refers to heavy, overwhelming and futile labor. For Camus, the mythical figure of Sisyphus is a personification of the idea of the lone warrior who consciously accepts the consequences of his actions, yet not as punishment, but rather as an opportunity to rebel against our own mortality, meaninglessness and inconsistency of fate. The environment of intimate community typical for Sedevchev’s projects inevitably immerses the observer into the role of a participant, this time in “One must imagine Sisyphus happy”. The usual behavior of the audience at his exhibitions is to try to put themselves in the shoes of the creators of the archives, to imagine their lives, personal relationships, their wish to exercise their free will in the frame of regimes that threaten individual freedom. The found notes, which fill the walls of the Water Tower with figures, are summarized by Radostin Sedevchev in stone sculptural objects to illustrate the concept that the seeming absurdity of each human act may turn out an emanation of the notion of happiness realized through an intense living experience, imbibed with mindful sensitivity in the present moment.

The spiral-like movement defined by the architecture of the tower leads the spectator to its top where here and now it is effectuated through the endless digital stream of information, which creates the sensation that events always go ahead of us before we manage to register their existence. The installation created in co-authorship with Antony Rayzhekov broadcasts live the change in the numbers of the population on earth that occurs every second and is accompanied by sounds signaling this change. They circulate up and down in the Water Tower driven by the acoustic particularities and create that specific sense of timelessness, in which past and present merge to create a new perspective on the dry statistics with which we attempt to describe the world.

The figures in which the artist has sealed the population reflected in the notebooks, chiseled from black unpolished gneiss are presented in this exhibition next to the plates from which they were cut out. These characteristic negative and positive prints of a certain human activity direct the attention to the way in which we create values in the frame of our existence and question what is more important - the result of our actions, or the energy of the process leading to this result. Thus, according to Camus, "It makes of fate a human matter, which must be settled among men". 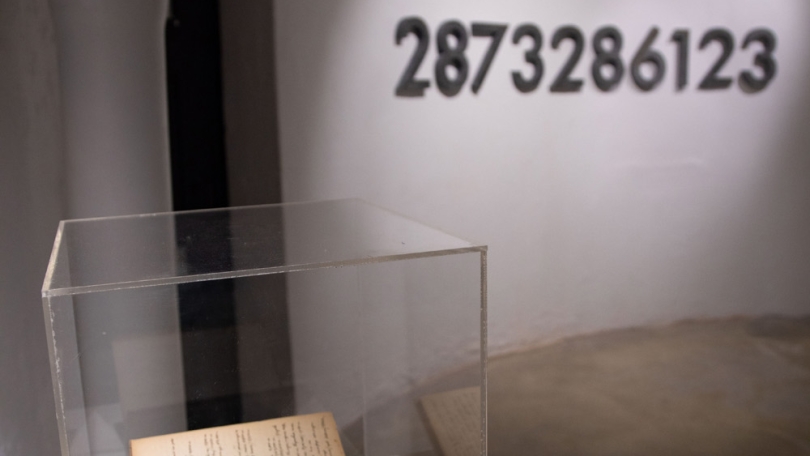 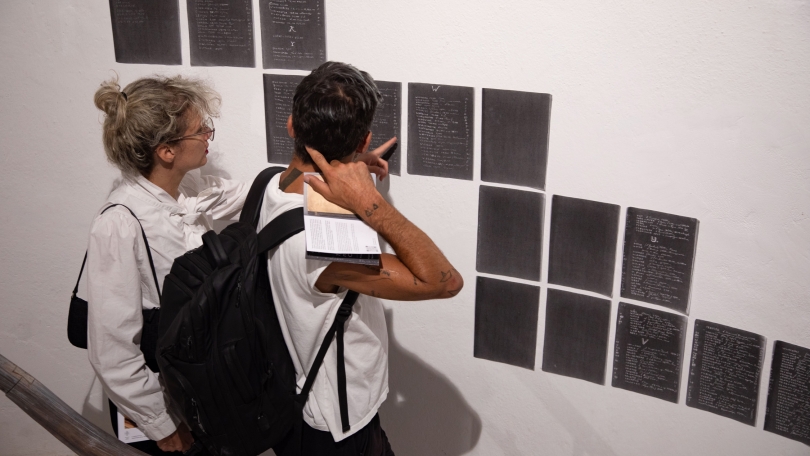 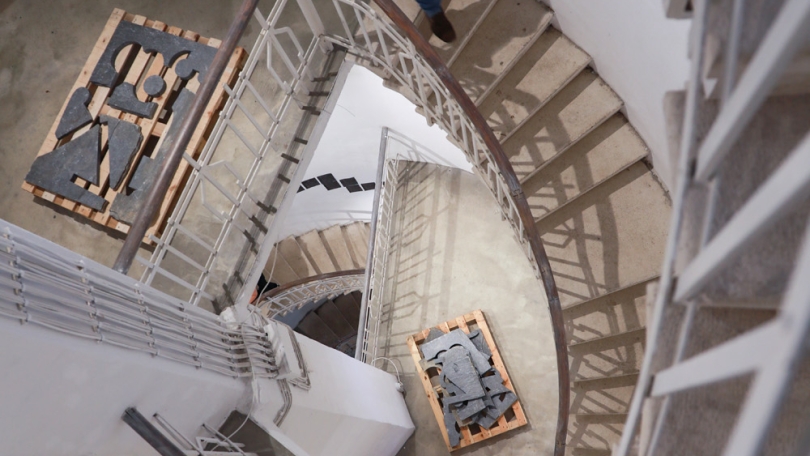 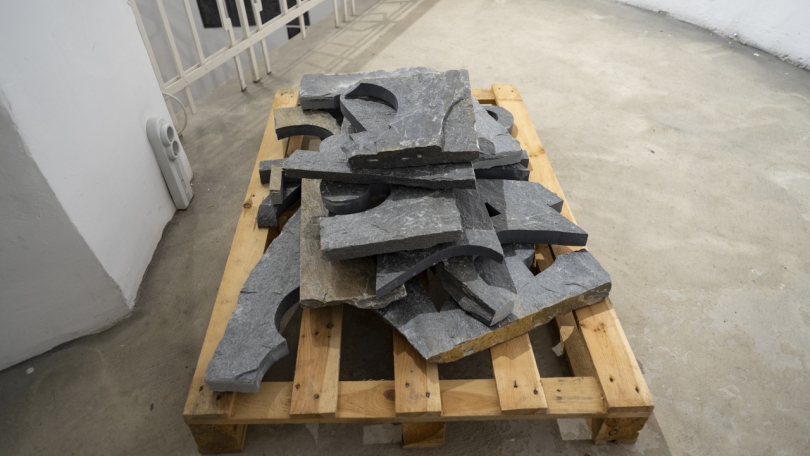 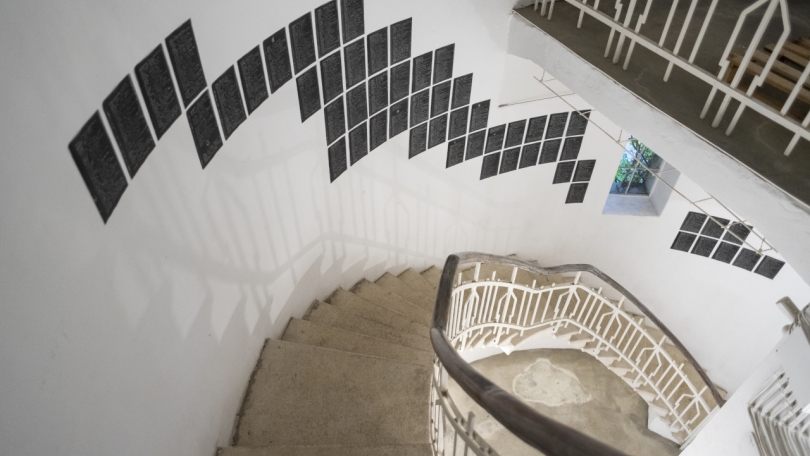 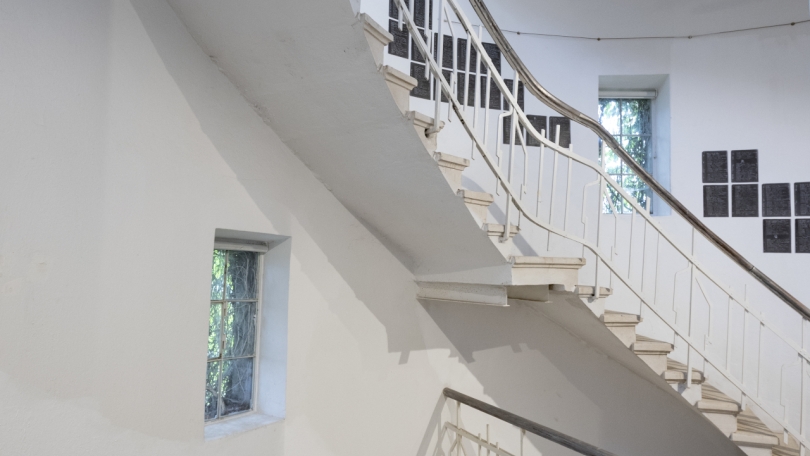 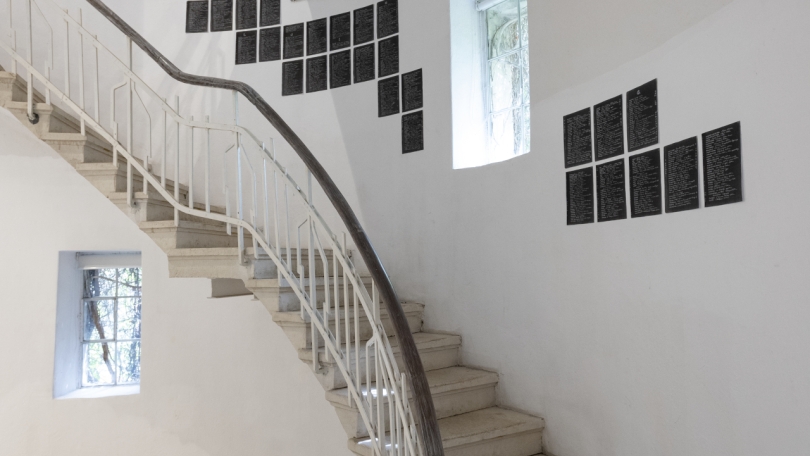 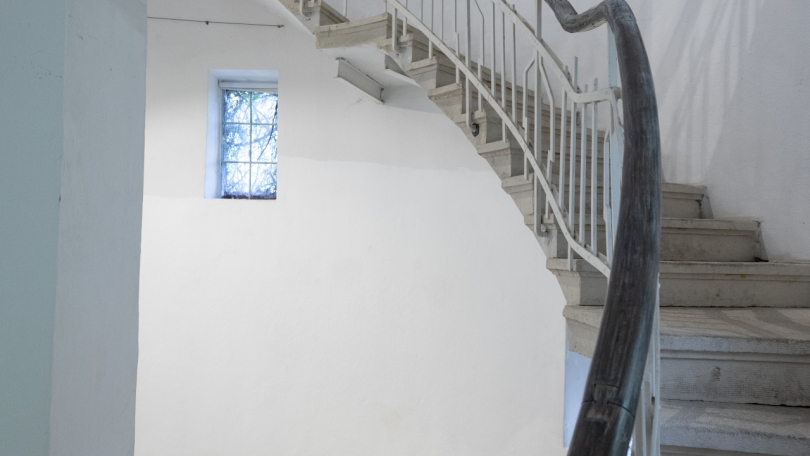 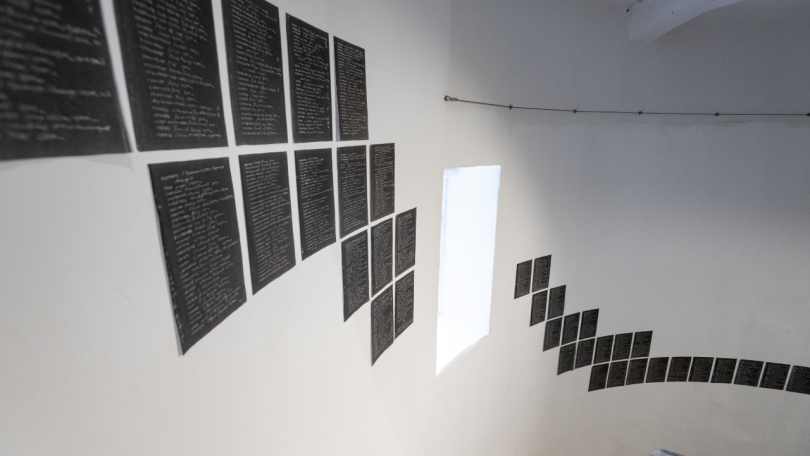 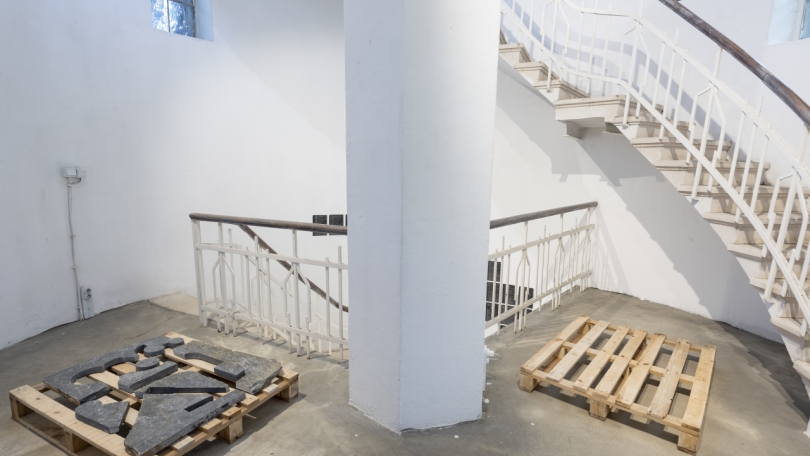 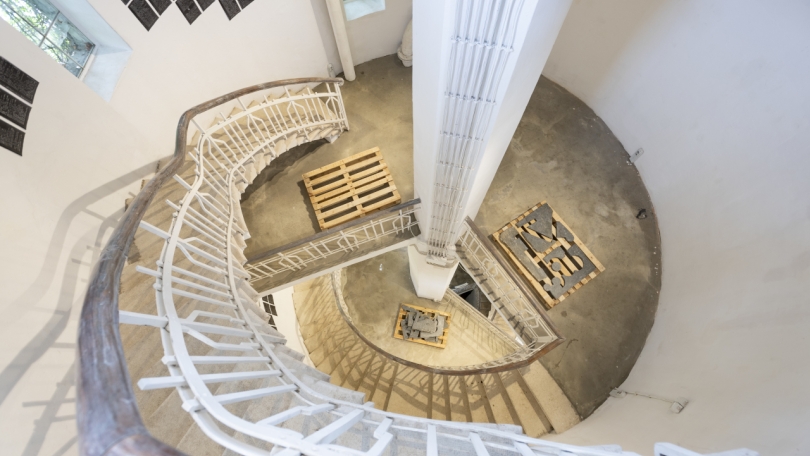 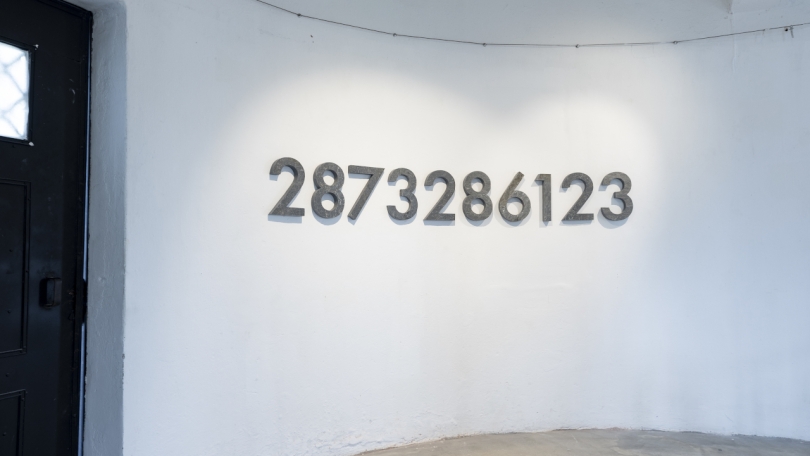 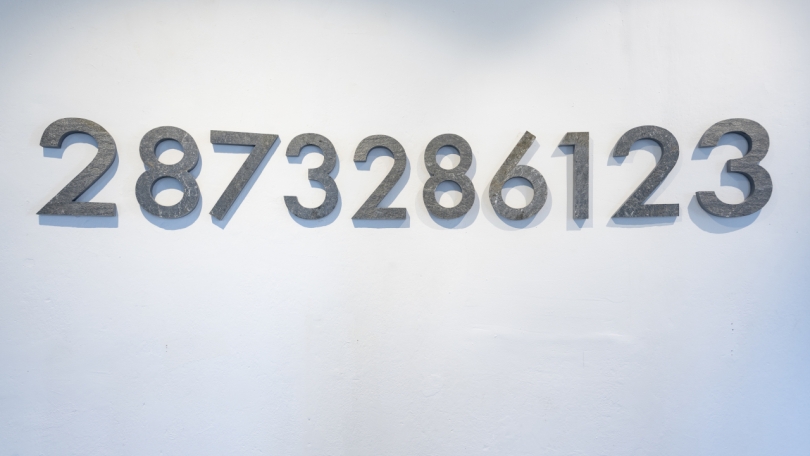 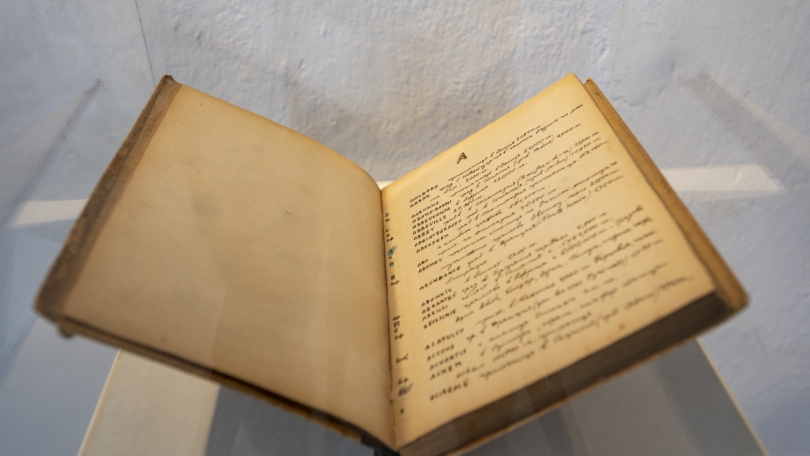 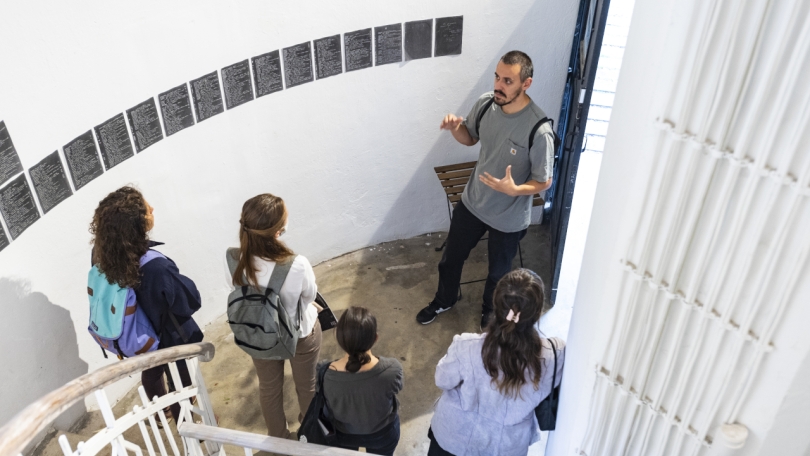 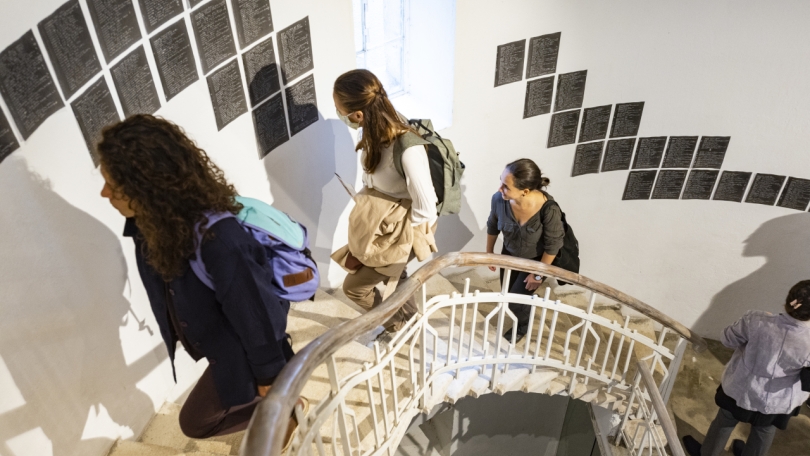 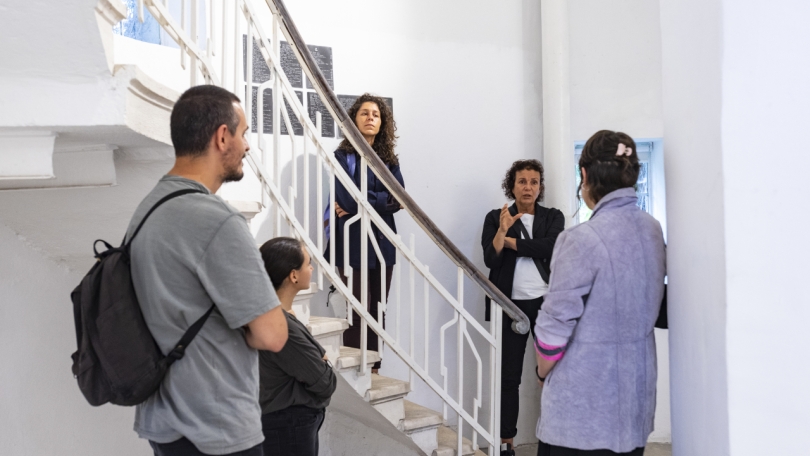 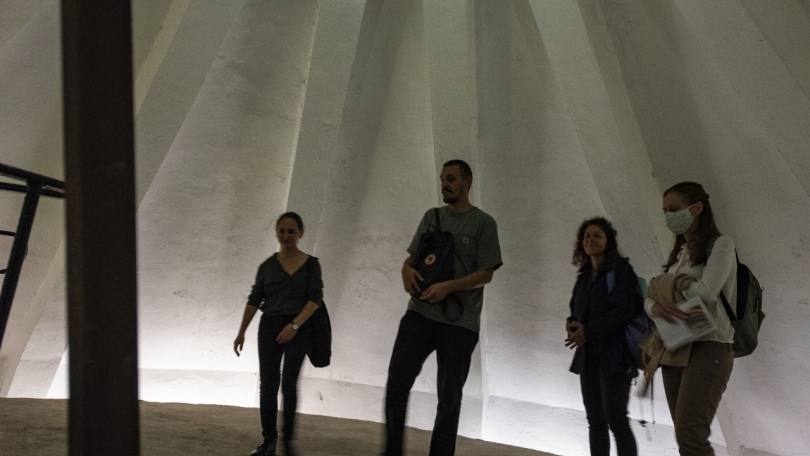 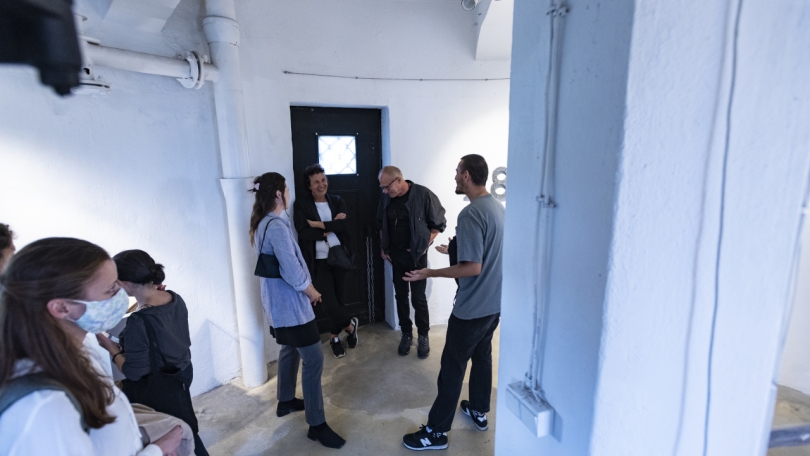