Redefining the Space of Everyday Life

The innumerable images of everyday life are those, which we take in automatically, name or make use of without analyzing them, as entities, which are beyond any doubt. Their characteristics in everyday speech are explicit and unambiguous for they are part of the personal history of every individual - this is the world, which gives us the reassurance that we belong to a community in which we share the same perceptions and the same words to describe them. They are part of the language of everyday communication, the means of exchanging information, which does not require special knowledge or concentration in order to be apprehended and comprehended.

The idea of this exhibition is to present a visual intervention into the "world of ordinary things" with the purpose of making the viewer reflect on the role of art as mediator between diverse intellectual fields and of generating new meanings and new concepts. The artists Peter Tzanev, Georgi Georgiev-Jorrras, Rada Boukova and Cvetan Krastev demonstrate various research approaches but are alike in one respect: the semantic transformation of trite and boring, even tedious objects of reality into the language of art - a language subject to ambivalent analyses and a multiplicity of viewpoints being determined by the educational level and the cultural, geographical, and frequently psychological situation in which the spectator happens to be. Not only does deliberate artistic intervention into the space of everyday life transform it visually; it also challenges the meaning of words by which we describe its characteristics and makes us search for new, more adequate terms to express the situations created by artists.

Peter Tzanev explores the boundary between physical and imaginary reality. He leaves luminous traces on a photograph of deliberately chosen ordinary and unobtrusive details of everyday life, which can be transformed, by the artist’s will, into works of art. Only, however, his "overpainting" of photographs puts under discussion also the artist’s role in such an act reminding the spectator of the paradox "that a picture remains always an action taking place in physical reality". In this sense, the classical approaches to pictorial interpretation, which abound in museum collections, are examples of illusory reality. The genuine artistic gesture fixes the moment when the artist decides to turn a particular object into an object of art. In this case, Peter Tzanev does not only "redefine" the notion of a creative act after the appearance of the "ready made" objects of Marcel Duchamps. He poses the question of whether it is possible for the art historian to respond in an adequate manner to the multidirectional development of contemporary visual culture with the aid of the old formulas applied at a time when art employed a different set of strategies for its realization.

In part of his recent projects, Georgi Georgiev-Jorrras uses "elements and objects of everyday life transformed by means of an elaborate and precise designer’s treatment"… He also deliberately overexposes them by ultimately placing them into boxes illuminated by cold neon light, which intensify their disturbing psychopathic effect. Here, the function and the name of the object itself forfeit their meaning: the boxes in a sterile white medium, suggesting the idea of a fetish, spark off a quick association with one of Norbert Bolz’s conclusions in his Konsumistisches Manifest (The Consumerist Manifesto): Beyond the threshold of civilizational saturation the important things are enacted solely in the human mind. Arnold Gelen designates this as "cerebral consumption". Consumption becomes reflexive, i.e. it now refers to itself; "we now consume not only goods, we consume consumption itself". Jorrras’s critical attitude in creating this installation is directed not only and solely at the extremes of material culture as a whole, but also at the hidden mechanisms leading to the degradation of morality and traditional values as exemplified by the Bulgarian transition to free market economy.

Rada Boukova works with objects of everyday life: plastic bags and satchels, balloons, laundry detergent bottles, watermelons, etc. which are taken out of the meaning of their daily use and placed in mutual relationships under the artist’s direction. These relationships take them to a new semantic level, creating a sort of visual brainteasers, which make it possible to analyze the objects at several levels. They first focus the attention on the obviousness of the purpose they serve but quite soon cause the viewer to hesitate in "fixing" them into a specific definition. Imperceptibly, the spectator steps into the role of a researcher into his own living environment and the possibilities of generating new, unanticipated discourses.

When debating on the authority the visual artist can have over the images of the surrounding world, Cvetan Krastev says: "It is even more often that lately I want my works to remain on the border between the perceptible and the physical phase, just at the point where it dematerializes. The presence or the absence of vision is not a determining factor". To that effect the artist puts the viewer, observing his works, in a specific area of gravitational singularity* – it is a location where the space time curvature tends to infinity. Here the sequence of actions doesn’t follow the already known cause-and-effect order, but it creates new dependencies where the role of the artist is to manipulate minor natural details or to document incomprehensible at first sight human activities. This strategy has key point significance in Cvetan Krastev’s video art. It is an ingenious attempt to find the place of the man in life on the global scale.

The guideline followed in selecting these authors and projects was the idea of "peering beyond the universally accepted understanding of the meanings of words, which we use to name the “things of life". In their practice as contemporary artists, free to give visual form to their ideas using diverse means of expression, they do not confine themselves to the chosen strategies for creating visual entities but also ponder questions, which illustrate issues from the domain of analytical philosophy and its interpretations of the logical structure of language.

The belief in the liberatory potential of "everyday life" seems to have revived once again after the 90s, thanks to the effect of the urban uprisings that shook the world. Lefebvre is still as young as he was in ’68, Situationists are still angry, Bakhtin is still feeding riot with joy. Creative eruptions like those in the Gezi Park protests render the possibility of anti-capitalist lifestyle imaginable. Today we know how the infinite range of our carnal experiences, the bricolage of everyday objects and the combination of images can suddenly and unexpectedly infuse the idea of freedom into society. A tangible and direct criticism of the ideology flourishes in the vastness of everyday life, "the world of ordinary things". These shifts in everyday life, make representation systems a prominent interrogation field for arts and politics.

Thus, a fresh morning breeze starts to blow from everyday life towards the field of art. This breeze carries out the inspiration for relationality, coincidence, spontaneity and productive encounter. All the inequalities and distinctions between aesthetics and politics, art and craft, contemporaneity and modernity, hand labour and mind labour, technology and cognition, the ordinary and the extraordinary are dispersed. That’s the perspective through which we approached the project "Redefining the Space of Everyday Life". At the Istanbul leg of this dynamic and open-ended encounter, we reflected on the aesthetically re-embraced experience of everyday life that is undoubtedly spatial, with artists Kerem Ozan Bayraktar, Uğur Çolak, Meliha Sözeri and Bahadır Yıldız. We came together at Gaia with Peter Tzanev, Georgi Georgiev-Jorrras, Rada Boukova, Tzvetan Krastev and the project curator Irina Batkova.

Kerem Ozan Bayraktar, Meliha Sözeri, Uğur Çolak and Bahadır Yıldız are brought together by the approaches that reverse the meaning of space and the objects of everyday life and create conflicts, gaps and hitches between different arrangements of meaning. The artists take off from the mundaneness of everyday life and create extraordinary situations. The dizzying variety of emotional spaces they create, scatter the cultural, geographical and political prejudices, making new coordinates within the viewers mind a possibility. The hovel and warm world of Bahadır Yıldız, the meticulous sterility of Kerem Ozan Bayraktar, the light and mass sculptures of Meliha Sözeri and the massless and non-coordinated photography of Uğur Çolak touch upon each other by creating contrast among themselves.

Bahadır Yıldız uses wooden objects with traditional functions: Prosthetic wooden feet, gas masks from the Second World War, windscreen wiper motor… The artist extracts images from his own memory and unclaimed memories. Objects of everyday life assume a troubling subjectivity, a human shaped emotionality in the absence of their owners and when they are stripped of their value of use. Autobiographical traces, images of local culture and works that carry psychoanalytic connotations are all a little sad and also a lot ironic. Bahadır Yıldız continues to wander around the surrealist flea market. However, he also passionately executes his craft at his stall with passion. He incorporates handicraft into the area of modern art both philosophically and aesthetically.

Meliha Sözeri interprets "everyday life" as being here at present. She "plants" bodies to rescue words from sentences, de facto meanings and the structural requirements of language and tack them to the "present time". On her sculptures, when objects from everyday life – just like words – lose their value of use, they put on a ghost-like transparency and a surprising mass. Meliha Sözeri thinks about the labour processes as well. She carries her mode of production that is the sewing machine to the area of the arts as an aesthetic product, enabling transitivity between varying categories of creative labour. What is the difference between an ordinary commodity and an object of art? What kinds of relationships are established between language, image and truth? How can we reproduce transparency as an aesthetical-political value? As a sculptor Meliha Sözeri seems to have "lightened the burdens" of existence in the field of modern art.

Kerem Ozan Bayraktar is a fan without blades, a broken machine, a mute orator, a functionless labourer of pleasure. He sets off our expectations while moving resolutely on his course. Our bodies awaken with lust. However this bizarre object leaves the viewer dissatisfied. It only makes us feel the absence of the breeze it points out. The absence of the expected impact fills a several-meter gap to the brim. A majority of works by Kerem Ozan Bayraktar carries this troubling halo. His video titled "Weight" allegorically describes the interaction of the concept of pain in traditional Western narrative with the body and time through the relationship between a mourning child and the apples that fall from an ailing tree. Throughout the video, a solitarily depicted child and the child’s struggle to heal this ambiguous loss is described within an implicit mythological context. Kerem Ozan Bayraktar creates an ice-cold experience regarding relationality in everyday life.

Uğur Çolak interprets the extent of everyday life as a procreative carrier of space. He keeps action, time and subject outside and renders the space expectant of a multitude of meaning. This is a shallow, centerless and massless world in which a homogenous light is dispersed over almost monochromatic surfaces. His photographs reveal the equalizing, balancing and remedial effects of everyday life. The dream of a paradise in which the garrulous mind falls asleep and nature, animals and bodies are freed from gravity. According to the artist, this paradise can only be achieved temporarily, when it suddenly sparkles within everyday life. Being right there at that moment and looking at it is only possible through photography. 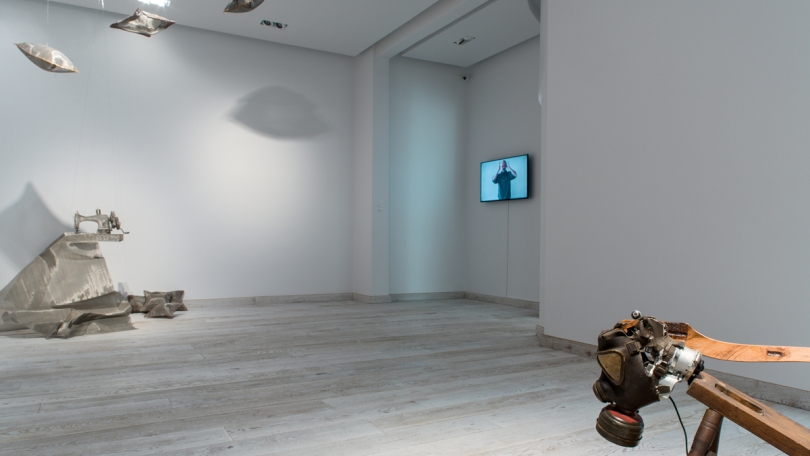 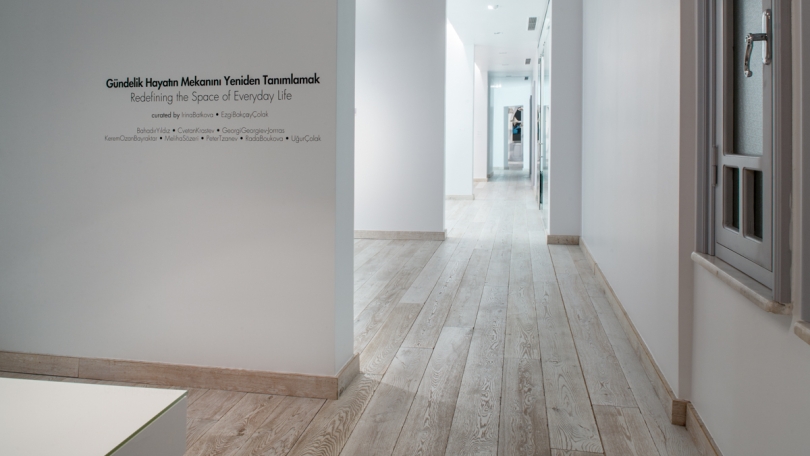