In 1950, Alan Turing developed the concept of the child machine, which was an idea of embryonic artificial intelligence. He imagined it as a simple system that used learning as a means of self-development. Turing believed that instead of creating a program that simulates the brain of an adult, a program could be created that simulates the brain of a child and then, when properly trained, we can obtain a brain of an adult. Modern intelligent systems interact with one another, share data, learn and improve - the origin of this digital communication is human, but the rationale behind which such systems evolve, in many cases is unpredictable. The invisible protocols laid down in the technical means without which we cannot imagine today's world are conditioned by the new virtual space of hypertext and e-writing. In Out of Control: The New Biology of Machines, Kevin Kelly emphasizes that "the total sum that we call knowledge or science represents a network of ideas that point to each other and enlighten each other, while at the same time the very shape of this network molds us.“ He believes that "artificial Intelligence will be intelligent, but not very human-like. It will be one of the many inhumane ways of thinking that will probably fill the library of thinking space with types of thinking that we simply cannot comprehend, but they will provide cognitive results beyond and outside our control." One of the ways chosen by modern science to simulate human cognitive abilities is artificial neural networks, which are mathematical analog of biological neural network. Personal memories, emotional perceptions stimulated by hormones in the human body, paradoxical associative thinking, remain impervious to mathematical modeling, and they are only part of the problems in the technical reproduction of the human brain. Therefore, besides being a creator, man is also a critical observer of an artificial environment in which digital architecture has materialized, creating a new world, parallel to the natural one.

The exhibition Digital Aesthetics examines the visual traces of technological development, the virtual reality where digital data storage takes place, and the way the objects removed from the technical context of existence affects our senses and changes our perceptions. The works of many contemporary visual artists focus on the interaction between humans and machines that builds a new imagery and its nature is yet to be given meaning and find its place in the human value system.

The documentary Binary Lives/Steina and Woody Vasulka by Peter Kirby (1996) is dedicated to the pioneers in this field of contemporary art, Steina and Woody Vasulka, who in 1971 made the first laboratory for artists experimenting with modern technologies. Vasulka began practical and theoretical research on what he called Epistemic Space. The study took several years, during which he analyzed the forms of interactivity between the player and machine through language, speech and music. In his work he uses multichannel projection systems, and his production was becoming more and more three-dimensional. The independent space they made - The Kitchen – allowed a number of performative and video artists to display their works for the first time - including Joan Jonas, Vito Aconci, Bill Viola, Nancy Holt, etc.

The work of Tor Jørgen van Eijk, Infinite Monologue /2015/ explores the communication between the technical means presented in a new aspect. Regardless of the fact that it looks like a continuation of the researches of Vasulka, not only in terms of content but also as the choice of technique - analogue video - the video installation displayed at the exhibition has the nature of an aesthetic experience of a new technological order. In Infinite Monologue, the video signal is in the dialogue with oneself. One of the distinctive features of the video is the option to manipulate the video signal in real time without any external reference. By directing the camcorder to its own playback monitor, electronic feedback is obtained. This methodology has roots at the beginning of video art, in the work of artists who showed considerable interest in the aesthetic possibilities inherent of the video signal itself. By placing the contact microphone on the monitor glass during the recording sessions, van Eijk allowed the video signal to modulate the sound. Sound wave recording follows the image, which is fluid, changing its colors and outlines so that the internal logic of oscillation changes the spectator's viewpoint and conflicts with the familiar images that human perception instantly attempts to refer to. Infinite Monologue is documentation of a technological process that refers to human perception in another parallel reality that has its own logic and parameters of understanding.

In Cold Storage, Michaela Lakova examines the architectural dimensions of our storage devices and how they translate into the physical world. The installation offers a poetic examination of the substantive quality of memory, which asks what the future of digital storage is– a glass-cold memory that lasts forever or an imperfect technology that can betray you. While the stored digital data may seem ephemeral or intangible, they actually have a physical presence in the real world. Lakova explores new technologies from the perspective of a visual artist. Their physical appearance in our daily lives should be rationalized from new points of view – from technical innovation, they have long become an integral part of our daily life, and the fact that they store data of our identity makes them subject to special attention. At the same time, Michaela Lakova's work reflects on the unpredictable historical transformations that the idea of memory underwent, as well as the metamorphoses of archiving related to the technological development of mankind.

The pursuit of efficiency and optimization is the basis of Dagmar Schürrer's video in The Ideal Deficiency, and the accompanying text reflects this constant requirement of today's lifestyle. Schürrer's collage approach is related to the theses of the German sociologist Hartmut Rosa, summarized in his book Social Acceleration: A New Theory of Modernity. He talks about that "social and cultural processes of modernization cannot find consistency in the construction of individual and collective entities to themselves". Thus, the acceleration of the pace of life as a result of the technological progress, forms the temporal structures of late modernity, which are characterized by a high degree of fragmentation. Dagmar Schürrer works with visual pieces of varying order that reflect not only the modern dynamics and fragmentation of perception, but also the confrontation between the artificial, industrially created product and the living human body, which seems unprotected and vulnerable compared to the machine perfectionism. In her videos, she mixes with audio and text a collage of appropriated web frames, abstract geometric elements, images of random objects and products that accompany us in everyday life. The visual environment created by Dagmar Schürer analyzes the way in which human relations are deployed in a postmodern situation determined by the technological society where the uniqueness of the ego is becoming more and more impossible. This leads to the need for reconsidering not only the world around us, but also the human role and place in it. 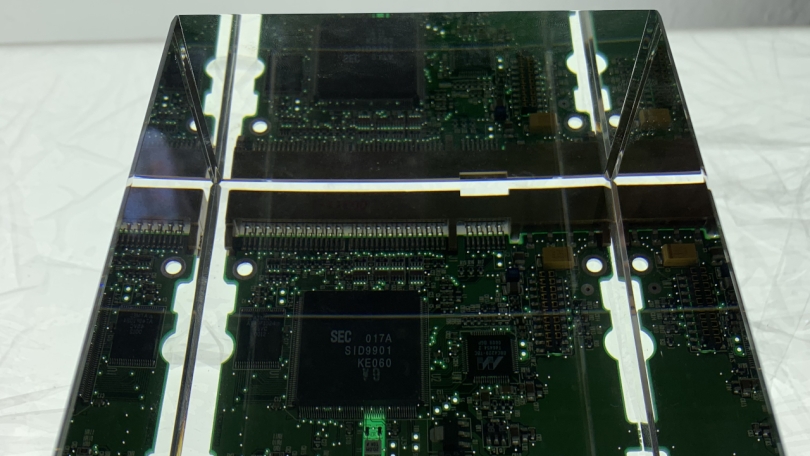 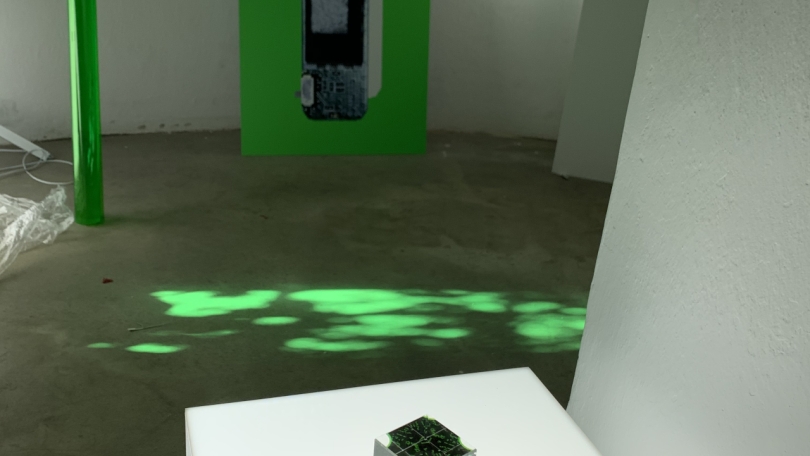 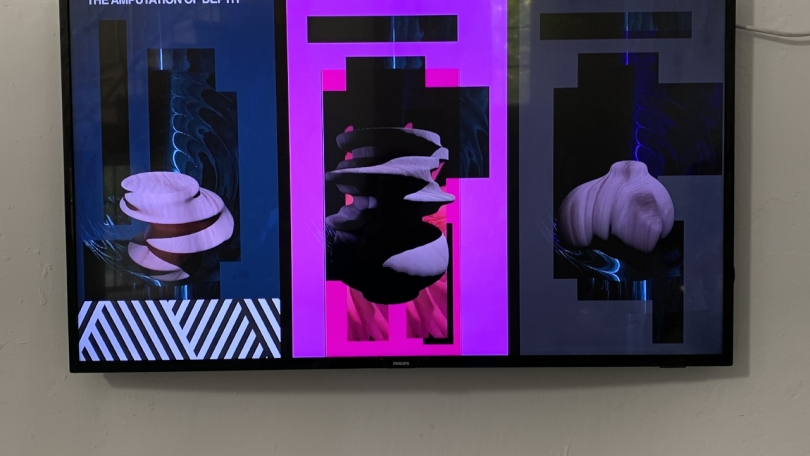 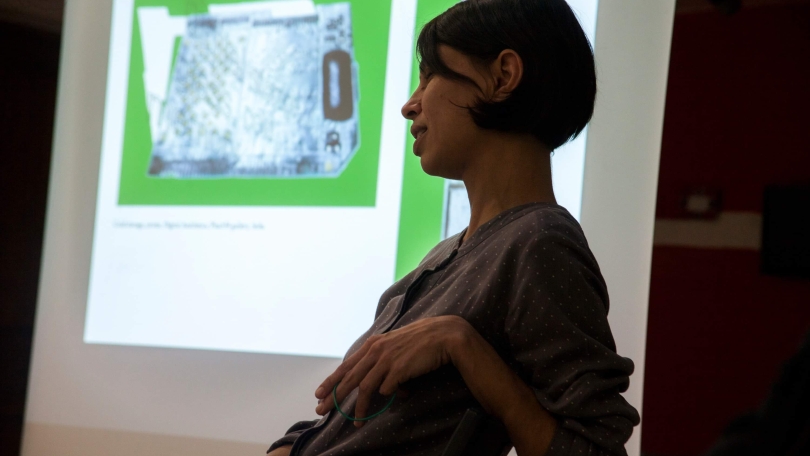 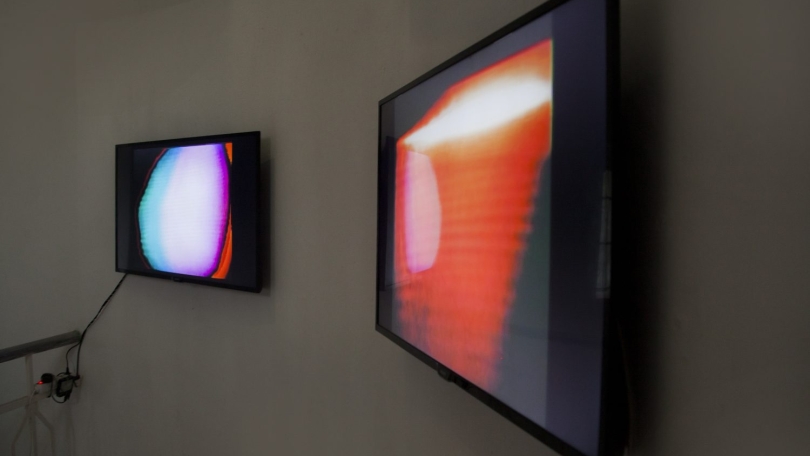